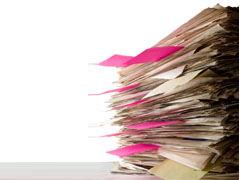 In the course of the implementation of the Action Programme for the elimination of administrative barriers more than 200 measures were adopted from 2009 to 2012. Additional 160 measures will be adopted by the end of this year. Most of these measures concern the revision of legislation while some of them are aimed at simplification of procedures. Regarding the number of adopted measures in the above mentioned period, Slovenia is on its way to reduce bureaucracy, but according to the results of the survey, published in Finance daily newspaper, there is still room for improvement. The results show that as much as 40 % of all users have difficulties with the unclear regulations while 30 % of them reported having to submit same reports to various state institutions. Other areas the users mentioned as difficult were the procedures for acquisition of building permits and the inspection supervision.

Within the framework of the program of measures in the period from October 2012 to May 2013 additional 26 measures were adopted, together with the 42 measures already adopted in the period July-September 2012 . These represent 26 % share of realization from the revised program, which includes 269 measures in total. The Government of the RS has taken notice of the aforementioned activities on its 12th regular meeting held on 6 June 2013.
All reports on the implementation of activities in the area of better regulation and elimination of administrative barriers are based on the Action Programme adopted in 2009 and revised in July 2012. The revised Programme also included the elimination of administrative barriers and reduction of the regulatory burdens; whereas the Ministry of the Interior coordinates the implementation of the Programme of better regulation and the Action Programme for the elimination of administrative barriers. The aim of the Project "minus 25 %" is to reduce the administrative barriers on the economy by 25 percent (360 million Euros per year). Taking into account the fact that for the majority of the unrealized measures (162 out of 184) the envisaged realization is the end of 2013 it is essential for the ministries to speed up the activities and ensure the high-quality realization of measures to reduce regulatory burdens. The main emphasis should be given to priority areas or as the case may be the realization of the 20 key measures resulting from:
• Action Programme "minus 25 %",
• Agenda 46 +,
• Requirements of Slovenian small crafts,
• Small Business Act,
• National Reform Programme 2013-2014,
• Stability Programme 2013, measures that are important for the development and increase of the competitiveness of the economy for a normatively most burdensome areas.

To increase synergy measures and to avoid reporting to various authorities on the same subject, the pursuit of a single coordination and consequently a much greater impact on the realization process, in June 2013 the Government of the RS will appoint an inter-departmental working group to prepare a single document with concrete definitions of measures, commitments, proposals for solutions, results and indicators, designated authorities and timeframe for the realization of all the above mentioned projects/programs to increase competitiveness and better business environment.
As of June 2013 public administration is becoming even more user-friendly as:
-    on the request and with the cooperation of the client, an official fills out a form, application, etc.;
-    it introduces notification of the holder on the expiration of the validity of their documents (identity card, passport, driving license).

General preference for the implementation of measures to reduce the burden on micro and small enterprises is essential as it contributes significantly to job creation and economic growth/well-being. In this context, it is necessary to follow the principle that the changes are appreciated, but if they are not fully considered and aimed for improvement it is better to maintain the status quo so that the changes would not result in any new and unnecessary burden.
Deli :
Natisni :